Chairman of the Board

H.E. Abdulla Al Sahi currently serves as Chairman of Modon Properties, Under-Secretary of the Department of Municipalities and Transport (DMT).

Chairman of the Board


H.E. Abdulla Al Sahi currently serves as Chairman of Modon Properties, Under-Secretary of the Department of Municipalities and Transport (DMT), and Chairman of Abu Dhabi General services (Musanada). He is also a member of the Board of Directors of Abu Dhabi Airports Company (ADAC), Abu Dhabi Housing Authority, and the Zayed Higher Organization for people of determination.

Before becoming the CEO of Modon Properties in 2017, H.E. Al Sahi was the Executive Director of Planning and Infrastructure and the Support Services Sectors at the Department of Urban Planning and Municipalities. Over the course of his career, Al Sahi has held several leadership positions in planning, infrastructure, policy, and regulation.

H.E. Al Sahi has also worked in a variety of Abu Dhabi government institutions, including the Mubadala Investment Company and the Tawazun Economic Council. He was also part of the team mandated to establish the Abu Dhabi Urban Planning Council (UPC) in 2007.

In 2017, H.E. Al Sahi chaired the Abu Dhabi Capital Projects Committee, and was responsible for evaluating all capital projects in Abu Dhabi, and classifying them according to implementation priorities.

H.E. Al Sahi holds a B.S. degree in Economics, and an M.A. in Administrative Studies from Boston University, Massachusetts, USA. 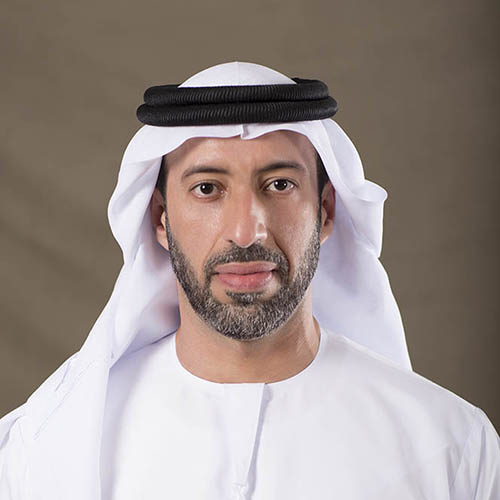 H.E. Saif Bader Al Qubaisi, Vice Chairman of the board of Modon, Since November 2017, has been the General Manager of the Municipality of Abu Dhabi City.

Prior to that, H.E. Saif Al Qubaisi was appointed as the Director General of the Abu Dhabi Housing Authority in May 2013. In this capacity, H.E. worked on the establishment of the Housing Authority, developing a range of housing programs along with their rules and regulations. In addition to this, H.E. also supported the preparation of organisational structures, the development of a central database of citizens, and the formulation of policies and procedures for all sectors in the Authority.

H.E. oversaw the transition to a paper-free work environment, and was the driving force behind the automation of the housing services submission process. This brought about greater efficiency, significantly reducing the average client waiting time; ensuring it does not exceed ten minutes. The submission process was successfully streamlined by the development of business application «CBA». The application utilises the customer's identity card to retrieve the citizen’s social data — in addition to their income and ownership information — via specified data sources accessed through a designated electronic connectivity with local and federal departments.

H.E. Saif Al Qubaisi was named Chairman of the Board of Directors of Abu Dhabi Health Services Company (SEHA) in April 2009, his tenure lasting five years. Under his stewardship, SEHA established itself as the largest integrated health care network in the Middle East, comprising 12 hospitals with a bed capacity of 2,644, 62 clinics, and 16,750 employees. Installed as SEHA’s first ever Managing Director in December 2009, H.E. helped steer the organisation in a new direction, transforming it into a public shareholding company.

Prior to his time with SEHA, H.E. Al Qubaisi spent more than seven years in the government sector with Health Authority-Abu Dhabi (HAAD), where he established himself as a strong administrator and manager. He quickly rose up the ranks from the role of administrative officer, to head of purchasing; before taking charge of the human resources department. He was then named as HAAD’s head of overall support services. Astute and enthusiastic, his appreciation for the nuances and complex nature of healthcare services landed him the role of Director, Health Services for HAAD in early 2007. Taking up this position, he supervised the operational performance of Abu Dhabi’s public healthcare facilities and was responsible for planning and delivering healthcare services. It was during this period that Emiri Decree #10 was enacted, establishing Abu Dhabi Health Services Company (SEHA).

Under his management, SEHA has won several awards, with H.E. being honoured on more than one occasion. He has been awarded a number of accolades, including:
• Abu Dhabi Award for Excellence in Administrative Supervision in 2007.
• The World Health Innovation Award of “ID World” in 2007 for his leadership role in the advancement of healthcare technology.


H.E. Al Qubaisi is a member of several boards of directors, advisory bodies and committees for a number of entities like Abu Dhabi Health Services Company (SEHA), Modon Properties, Department of Transport, and Abu Dhabi Waste Management Center “Tadweer”. H.E. also chairs the Technology Committee in the Department of Urban Planning and Municipalities and is also acting Chair of the Social Development Committee in the Executive Council.

H.E. Al Qubaisi holds a bachelor's degree in Business Administration, and received a Master's Degree in the same specialisation with honours in 2010; both degrees being awarded by the Higher Colleges of Technology - Abu Dhabi.

H.E. Al Qubaisi is married and has five children. His hobbies include running and swimming. In addition to being a Member of the Board of Modon, H.E. Humaid Matar Al Dhaheri is one of the dynamic leaders.


H.E. Humaid Matar Al Dhaheri is a dynamic leader with a storied career, having joined Abu Dhabi National Exhibitions Company (ADNEC) when it was founded in 2005. In addition to being a Modon Board Member, H.E. has over ten years’ worth of experience lending his expertise to leading governmental and non-governmental entities in Abu Dhabi.

He has played a pivotal role in raising ADNEC’s profile as a leading event venue on both the regional and international stage. He has also been instrumental in shaping ADNEC’s revised corporate strategy and company vision.

Prior to his appointment as ADNEC’s Group Chief Executive Officer, H.E. Al Dhaheri held several senior positions within the company, serving as the organisation’s Chief Commercial Officer. He quickly distinguished himself as a highly capable CIO, being a key contributor to ADNEC’s development into one of Abu Dhabi’s most dynamic organisations.

H.E. occupies a number of other senior positions, and is a Member of the Board of Directors of Abu Dhabi Tourism & Culture Authority, ExCeL London, the National Conferences and Exhibitions Committee, and Al Ain Club Investment Company.

H.E. Al Dhaheri holds a Masters in Strategy and National Security Studies from the National Defence College in Abu Dhabi, as well as a Masters in International Accounting and Financial Management from the University Of Glasgow in the UK. He was also awarded with a Bachelor of Accounting Degree by the United Arab Emirates University. In addition to being a board member at Modon, H.E. Saeed Al Mazrouei is the Head of Mergers & Acquisitions of Mubadala.


H.E. Saeed Al Mazrouei is the Head of Mergers & Acquisitions of Mubadala. Prior to this, he was seconded from Mubadala to oversee the Debt Management Office (DMO) within the Abu Dhabi Department of Finance.

In 2009, he spearheaded the launch and establishment of the DMO, and continues to lead the office’s strategic direction. In the years leading up to his appointment at the Department of Finance, H.E. was — for two years — a key member of the Mubadala Acquisitions Unit, having distinguished himself in the world of investment banking with two impressive years at The National Investor.

H.E. Al Mazrouei has served as an Aldar Properties Abu Dhabi Fund for Development Board Member, and is currently a Member of Aabar Investments’ Board of Directors.

His achievements include the successful private placement of Thuraya, a leading mobile satellite operator; Tamweel IPO, and the successful acquisition of Viceroy Hotel group. He was also responsible for the establishment of Mubadala GE Capital. H.E. Al Mazrouei also played a leading role in negotiating the sale of Mubadala’s 40% stake in Tabreed to ENGIE for AED 2.8 billion.

Furthermore, H.E. was a member of the Project Management Office that was oversaw the merger of Mubadala and IPIC.

During his tenure at the DMO, he led government transactions to provide support funding to the Dubai Government, a number of Abu Dhabi banks, Aldar, and Sorouh Properties; this funding amounting to over USD 30 billion. He also completed a USD 10 billion joint venture agreement between Russian Direct Investment Fund and the Department of Finance and debt raising of USD 3.0 billion.

H.E. Al Mazrouei holds a BSc in Finance from Suffolk University, US, an MSc in International Securities Investment and Banking from the University of Reading, UK; and an MSc in National Security and Strategic Studies from National Defense College, UAE. 
His Excellency Basheer Khalfan Al Mehairbi, Director General of the Abu Dhabi Housing Authority, manages all operations of the Authority, including monitoring of the plans, policies, and regulations that ensure achieving the vision and strategy of ADHA's leadership and the decisions of its Board of Directors, which focus, in their entirety, on providing adequate housing for the citizens of the Emirate in accordance with the laws, regulations, and rules adopted.

Mr. Al Mehairbi has held several positions, including CIO at the Health Authority - Abu Dhabi and Deputy Executive Director of the Information Systems Department at Abu Dhabi Health Services Company (SEHA). He also responsible for implementing the unified health file system application project, which involves electronic recording of medical records and files to reduce medical errors, ensure drug safety, and reduce operational costs by bringing about and using the latest IT applications so as to support decision-making in health facilities.

Mr. Al Mehairbi holds a Higher Diploma in Information Technology from the Higher Colleges of Technology, a Bachelor's Degree in International Business, a Master's Degree in International Finance, and other scientific and professional certificates, including PMP in Project Management, the Certificate of Executive Leadership from INSEAD University and Harvard University, the Certificate of Strategic Technical Analyst in Health Technology from the American Research Center (Gartner) and Microsoft MCSE in Infrastructure & System Engineer, as well as the CIW E-Commerce Specialist Certificate.